When residents of Takoma Village Commons, a residential cohousing development in Washington, DC, envisioned their new home, they sought a stable structure that adapts to the flow of varied uses that would surround it. That’s what they got when the property opened during a cold January in 2001. Over the next decade, the buildings continued to evolve 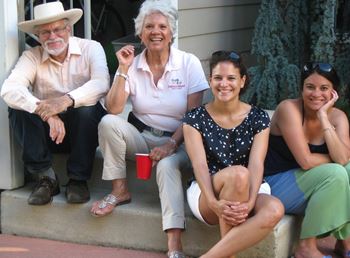 to be more sustainable than the day construction stopped—both in terms of the relationships forged there and the “greening” of the property.

“Buildings are green. Communities are sustainable,” said Ann Zabaldo, a Takoma Village resident when describing the complex of private houses and common spaces. The cohousing model values the intersection of these spaces that serve the entire community. Residents rent or own their units, gather in shared facilities to participate in group activities, and take part in shared decision-making about property-related matters. Cohousing often attracts members with like-minded values. When designing Takoma Village, members worked closely with the architect/developer, EDG, to make decisions that matched the community’s cultural fit and vision.

To meet the energy efficient goals, EDG, knew that the 43-unit complex must be orientated properly on the site. The overall massing is oriented on an east-west axis with shared unit walls to limit heat loss. The design-phase sun-path model study confirmed that the south wing shouldn’t exceed two stories so that daylight could penetrate the central court yard and avoid shading the four-story north wing. Windows were strategically incorporated into the north and south facades with ample overhangs to shade the windows in the summer and avoid solar heat gain. Light colored roofing was selected to reduce the heat-island effect and minimize cooling load. Ensuring the envelope was sealed properly, blower door tests were performed. Other building efficiency measures include ground-source heating and cooling systems, programmable thermostats, steam preheated hot water, and efficient lighting.

In 2015, Takoma Village cohousing members took a new step toward sustainability goals when they voted to install a solar array to offset the community area energy consumption and reduce their nearly $1,200 month utility bill for the common areas. Since installing the array, the monthly bill has been largely supplanted with onsite renewable energy that supplies the property and sends excess power back to the electricity grid. An online solar monitor displays the amount of energy produced, CO2 saved and other environmental benefits. In all, the new solar system has put Takoma Village in the path to net-zero energy performance and offset nearly 180 metric tons of CO2 or the equivalent of carbon sequestered by 210 acres of forest year year—an indication that residents are meeting their community and sustainability goals.